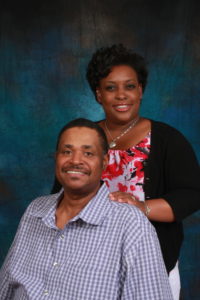 Charles Edward Survine was born October, 20, 1962, in Los Angeles, CA to the late Dr. Demaster M. & Rosie L. Survine, Jr. He was reared in Denver, CO, after his father, was called in 1969 to serve as Pastor of the Mt. Carmel Baptist Church. Chuck is the youngest son of 5 siblings.

He is a product of the Denver Public School system, and graduated from Thomas Jefferson High, class of 1980. He earned an A.A.S. (Associate of Applied Science) from Community College of Denver, B.S. (Bachelor of Science) from Metropolitan State College, Master of Theology (M.Th.) from United Theological Seminary & Bible College and Doctor of Biblical Studies (DBS) from Survine Ministries Bible College.

Chuck was a fathers boy and was known to sit with his father in the pulpit from a very early age. He preached his first and shortest sermon at the age of 5, when standing on a chair to be seen, he proclaimed, “God is good”, and returned to his seat. Like most ministers, he ran from his calling as spokesman for the most high God until his journey of running ended and he answered his call on March 28, 1993. That night He was licensed to preach the Gospel. He was later ordained at the Watch Night Service in 1993 at the Peaceful Rest Baptist Church by the Late Dr. D.M. Survine Jr. along with the late Dr. P.H. Gholston who served as moderator and catechizer.

Rev. Survine is married to the former Melissa W Green and the father of one daughter, Alyssa. His hobbies and interest are “fixing things” and reading.

A called servant of the Most High God set for the defense of the Gospel. Being led by the Holy Spirit and the abundant blessings of the Son. A man of God who walks circumspectly, rightly dividing the word of truth dedicated to the perfecting of the saints. He is humbly honored to be the “shepherd of God’s people” for the flock the Lord so graciously calls Peaceful Rest Baptist Church, located in Aurora, Co. He is a “tender shepherd” who takes his calling seriously. With God as his guide, Chuck’s life’s goals are to edify the Church, glorify God and build His kingdom.